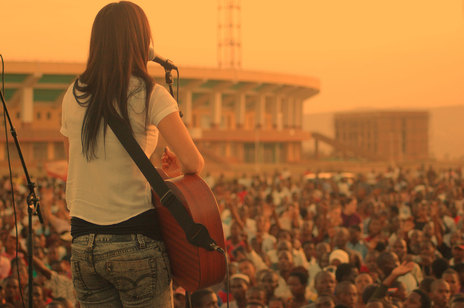 Today marks 15 years since the release of Brooke Fraser’s classic album Albertine. It was the songbook that captured hearts at home and abroad, revealing the songwriting power of the celebrated, award-winning New Zealand artist and songwriter.

In Albertine, Fraser brought us legendary songs such as airplay hit ‘Deciphering Me’, the unforgettable ‘Shadow Feet’ and the album’s polarizing title track.

Just three years earlier, Fraser emerged with her multi-platinum debut album What To Do With Daylight which saw her become a household name at an early age. She came to have a permanent residency on the charts as the album produced four #1 radio hits. Following two life changing trips to Tanzania and Rwanda, Brooke turned to her roots and went to the heart of songwriting with her follow up album, Albertine.

Camping out in Los Angeles and recording over a Californian summer with an all American cast, Albertine came to life. Behind the classic record is American producer Marshall Altman and engineer Joe Zook along with a talented cast of studio musicians who have played for a number of big names including Jane’s Addiction, Gwen Stefani, Alanis Morrisette, Lionel Richie, Jewel, John Mayer, Sarah McLachlan and more.

Albertine charted at #1 when it debuted in December 2006, becoming her second successive #1 NZ album. Brooke continued to dominate the charts with lead single ‘Deciphering Me’ and ‘Shadow Feet’ with both holding #1 all airplay positions. Following the release, Brooke and her live band embarked on an extensive world tour taking the story of Albertine to faraway places such as the UK, Japan, Europe and the US, as well as Australia where the album made a Top 5 ARIA chart debut, going certified Gold. The album debuted on the US Billboard Top 200, introducing America to the exquisite and undeniable work of Brooke Fraser.

15 years on, the songs of Albertine carry the same potency and power as they did all those years ago.

Last month, Brooke announced an extremely limited run of Albertine anniversary vinyl, complete with 15th Anniversary artwork. The album is pressed to perfection on 180g standard black vinyl in a limited run of 300.

Exploring the deeper stories and songwriting gems behind Albertine, later this month Brooke Fraser and Sony Music New Zealand will release a special one-off podcast episode hosted by Ash Wallace (Foley), taking fans behind the scenes in an intimate look behind the making of this iconic record.