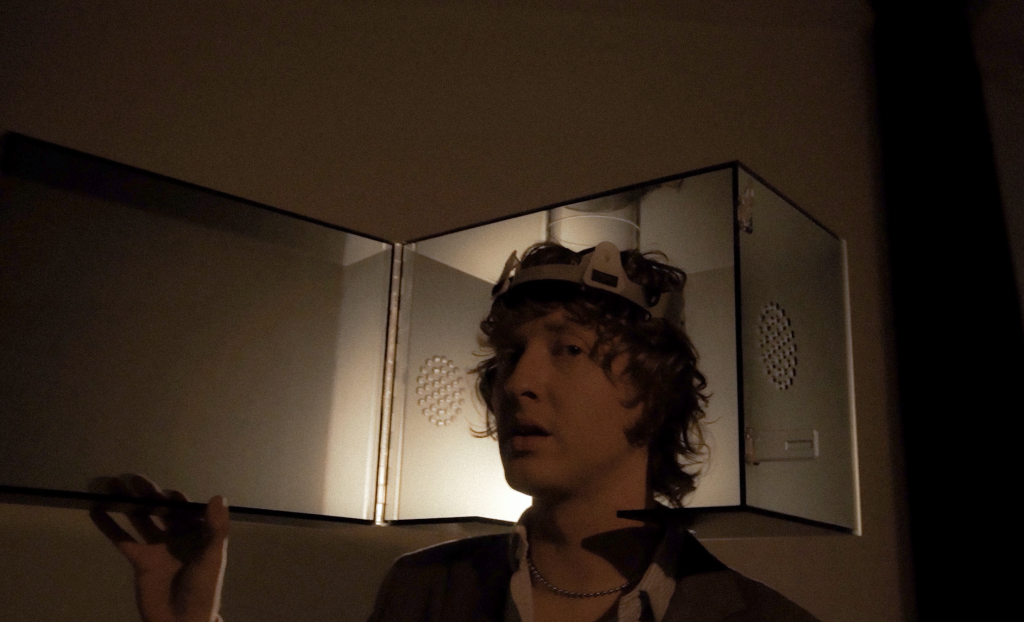 As the songwriter, vocalist, multi-instrumentalist and producer’s first single in more than a year, ‘Headcase’ provides a must-have adrenaline rush of saccharine off-kilter pop. Making clever use of space, the track’s clicking marimbas and deep hums of bass prop up Matthew’s iconic drawl that reads like a diary, pages laid open for all to read. Added flourishes of horn and twinkling guitars akin to Paul Simon’s Graceland or Peter Gabriel’s brightest works, build a crescendoing world of pop-fusion while Matthew’s R&B inflected melodies render the song entirely unique.

Matthew Young says on the release: “‘Headcase’ was the first song I made while on the road, in the first house I stayed in, within the first few days of arriving. It was a wooden house in an isolated mountain valley, with no other houses in sight, no curtains and no one to distract me.

In those early days of starting work on the album, I didn’t intend to use the writing process as a means of untangling my knotted noodle of a brain, but after writing this song I couldn’t help but to keep on pulling that thread. It was kinda like flicking the first domino, starting a chain reaction.

The early spring, sub-tropical climate had an almost spiritual effect on me and gave me the energy to reflect on my life and open up about it. I wanted this song to be like a snapshot of the person I had been for the previous 3 or 4 years, but subtracting the melodrama and theatre of how songs like these are usually packaged musically. I wanted the music to feel truer to how mental illness is more commonly experienced; humming away, in the ebb and flow of everyday life. Sometimes it’s all you can hear, other times it feels quiet like a whisper.”

Since the end of 2018, Matthew Young has rejected a traditional modern studio environment, opting to write on the road, and travel the length of his home country, New Zealand. Recording from isolated Airbnb’s, Matthew has dedicated time to unravelling the intricacies of his mental health via the medium of musical vulnerability. His ongoing quest for internal peace and understanding the complexities of living with bipolar disorder, last year led to the release of ‘Just Hold Tight’, a response to his own experiences throughout the globally affecting COVID-19 pandemic.

Matthew Young first made his debut in 2015, when his Dive EP received nods from Troye Sivan, Oyster Magazine and i-D. Three years later, his sophomore EP, Fruit, arrived to resounding success. To date, Fruit has amassed over 12 million streams, with singles‘Collect’and ‘Hey’ both landing triple j’s #1 Most Played. On stage, Matthew Young has performed to sold out Australian and New Zealand audiences, as well as supported the likes of Lorde, and was hand-picked to perform at the Laneway Presents ARIA Showcase. In late 2019, Matthew Young teamed up with favourite electronic duo Cosmo’s Midnight for their single, ‘It’s Love’, which sits at over 5 million streams and again became triple j’s Most Played.

As Matthew Young prepares to share more new music from a vault of deeply personal lived experiences, today enjoy the immediate balm of ‘Headcase’ and its invitation to an emotional world of loveable alt-pop.