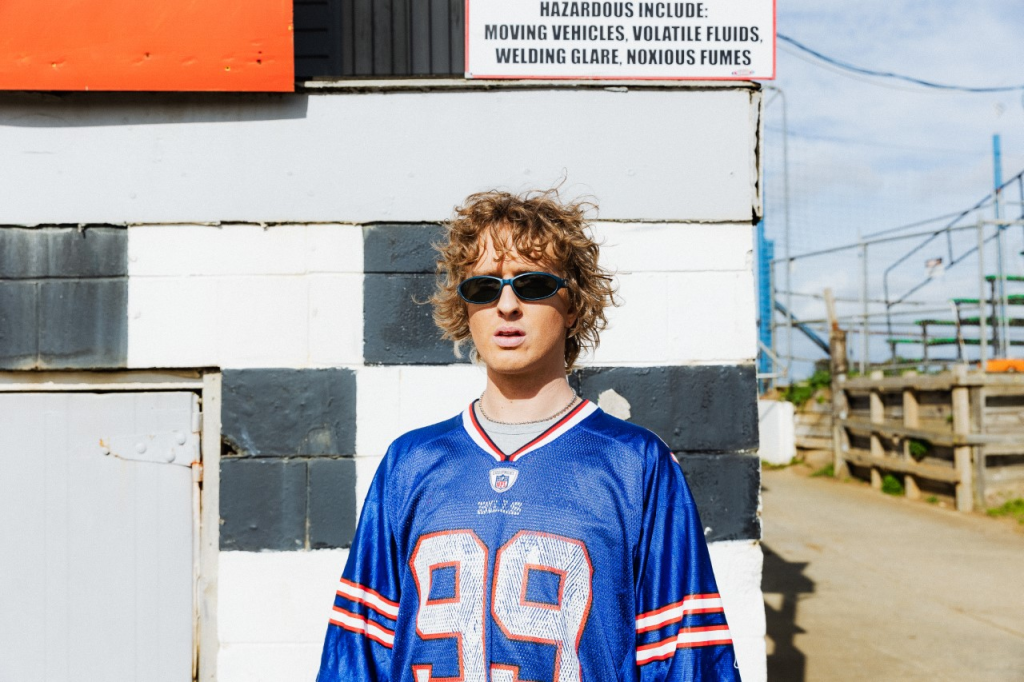 ‘Boneheaded’ follows on from Matthew’s 2021 release ‘Headcase’, which reintroduced his unique brand of tongue-in-cheek off-kilter pop to the world. No exception to the rule, the songwriter, vocalist, multi-instrumentalist and producer extends his clever phrasings and playful drawl to today’s track. The release takes inspiration from a reevaluation of Matthew’s life priorities, and the shifting states of perception through his own relationship with mental illness. A tempered beat provides a steady rhythm as loaded guitars grind and jangle throughout, beneath a piano solo and clanking percussion. Fun and seemingly carefree, the pop spirit of ‘Boneheaded’ creates another unmissable invitation into Matthew Young’s infectious world of melodic pop-fusion.

Accompanying today’s single is the ‘Boneheaded’ video. Transplanting the high-polished and perfect parameters of a Hollywood rom-com to the small town temperament of New Zealand, Matthew soon realizes a sin city lifestyle is nothing but an out-of-reach facade. A visual commentary on the incongruity of lust for superstardom in Aotearoa is Matthew’s flexing of his sharpest wit.

“The inspiration for ‘Boneheaded’ came from reevaluating my priorities in life and addressing the delusions of grandeur that came with prolonged manic psychosis. Also, I’d just finished watching Mean Girls for probably the one millionth time and googled ‘what happened to Lindsay Lohan?’, so yeah the whole fame thing and how it seems to wreck people was something I was thinking about, especially in terms of trying to figure out my own lust for success.

I made the early part of the beat for this song in late 2018, in a remote house in Taranaki and a little bit in Martinborough, during the writing trip I was on. The songwriting happened in early 2019, so this one has been in the vault for a while.

This song represents a time more than my sound or music holistically. It has a lot of the sonic character of the music I was making in 2019 (guitars and shit) and heaps of the lines are really stupid, which is something I tend to do for my own (mild) amusement.”

Since the end of 2018, Matthew Young has rejected a traditional modern studio environment, opting to write on the road, and travel the length of his home country, New Zealand. Recording from isolated Airbnb’s, Matthew has dedicated time to unraveling the intricacies of his mental health via the medium of musical vulnerability. In 2021, Matthew Young shared ‘Headcase’ and quickly scored playlist support across Spotify New Music Friday globally, tastemaking coverage from Pilerats, Sniffers and love from radio alike. His ongoing quest for internal peace and understanding the complexities of living with bipolar disorder, last year led to the release of ‘Just Hold Tight’, a response to his own experiences throughout the globally affecting COVID-19 pandemic.

Matthew Young first made his debut in 2015, when his Dive EP received nods from Troye Sivan, Oyster Magazine and i-D. Three years later, his sophomore EP, Fruit, arrived to resounding success. To date, Fruit has amassed over 10 million streams, with singles ‘Collect’ and ‘Hey’ both landing triple j’s #1 Most Played. On stage, Matthew Young has performed to sold out Australian and New Zealand audiences, as well as supported the likes of Lorde, and was hand-picked to perform at the Laneway Presents ARIA Showcase. In late 2019, Matthew Young teamed up with favourite electronic duo Cosmo’s Midnight’s for their single, ‘It’s Love’, which sits at over 5 million streams and again became triple j’s Most Played.

Reacquainting us with his depth of analogies and pop swagger fuelled by a willingness to delve into his deepest personal lived experiences, jump back into the fun and incredibly catchy world of Matthew Young in ‘Boneheaded’ today.