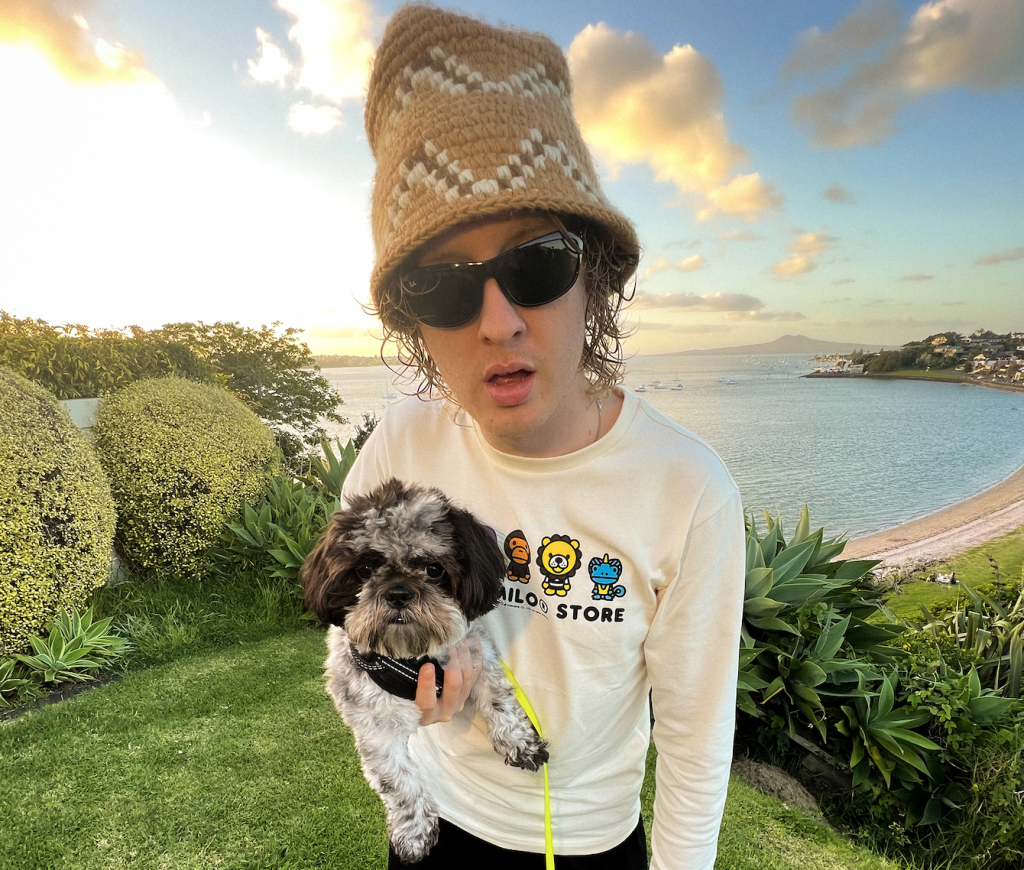 The golden child of New Zealand alt-pop, Matthew Young today returns with a sparkling new single and video, “Like Falling”, out now.

“Like Falling” follows a string of singles showcasing Young’s distinctive brand of syrupy alt-pop. Whilst his latest offering remains cohesive to this sonic buoyancy, its bright soundscape arrives in stark juxtaposition to lyricism centered on substance abuse and picking up the pieces in the aftermath. Jangly percussion and broad strums of guitar build and pace – reminiscent of the Fruit EP era – before converging on a euphoric earworm hook.

The accompanying video to “Like Falling” takes place in the world of a raucous 90s house party, and sees Matthew submit to a dizzying loop of hedonism and excess. Between moments of dissociation on kitchen dance-floors and pauses of examination in front of bathroom mirrors, Matthew is tugged in and out of his loop of self-destruction by what appears to be a pair of hallucinations.

Speaking to “Like Falling” and its accompanying clip, Matthew shares: “‘Like Falling’ is a song about getting too manic, abusing sedatives and trying to mend broken relationships. It’s about facing the consequences of my actions and trying to piece everything back together all while being zombified on downers. That pretty much sums it up.”

“The video is basically like a short biopic of my experience of that time, but slightly inflated for the drama. It’s also a follow on from the ‘Boneheaded’ video, but this time I’m playing myself, as if addiction was the price I paid for movie stardom. Shoutout to Pete Davidson for the eye makeup inspo.”

“Like Falling” follows a string of singles “Ziptied”, “Headcase” and “Boneheaded”, which have seen tastemaker praise from MTV, Pilerats, Sniffers, Purple Sneakers and more, alongside global playlisting on Spotify’s New Music Friday. Matthew Young first made his debut in 2015, when his Dive EP received nods from Troye Sivan, Oyster Magazine and i-D. Three years later, his sophomore EP, Fruit, arrived to resounding success. To date, Fruit has amassed over 10 million streams, with singles “Collect” and “Hey” both landing triple j’s #1 Most Played. On stage, Matthew Young has performed to sold out Australian and New Zealand audiences, as well as supported the likes of Lorde, and was hand-picked to perform at the Laneway Presents ARIA Showcase. In late 2019, Matthew Young teamed up with favourite electronic duo Cosmo’s Midnight for their single, “It’s Love”, which sits at over 5 million streams and again became triple j’s Most Played.

Arriving ahead of Matthew Young’s recently announced performance at Auckland’s Everyday People Festival in May, the smooth alt-perfection of “Like Falling” is yet another notch in the belt of the rising star. Stay tuned for more from the eclectic world of Matthew Young.